Posted at 16:01h in Clinical Trials, Migraine by KLong 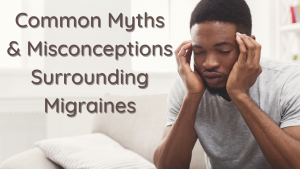 Nearly everyone experiences a headache every so often…

whether it be due to stress, a poor night’s sleep, or persistent loud noise. Though not quite as common as a typical headache, migraine is an extremely prevalent neurological condition that affects up to 39 million adults and children in the United States. Are you familiar with some common myths and misunderstandings regarding this condition? We’re here to set the record straight on migraines.

Myth #1: A migraine is just a headache

Although many people may consider a migraine to simply be a painful headache, a migraine is much more than that. A migraine is a primary headache disorder, and headaches are merely one symptom of a migraine. In fact, some people who suffer from migraines don’t experience head pain at all. Headaches typically last only a short while and do not often interfere with daily activities, while a migraine can be very severe and ruin an individual’s plans for the day or even days. Symptoms of migraine may include severe throbbing or pounding pain, often on one side of the head, sensitivity to sounds, light, and smells, and vision problems, including flashing dots and blurriness, also known as migraine aura.

Myth #2: Migraines are not a serious condition

Since some may think that a migraine is nothing more than an intense headache, they may subsequently believe that migraines are nothing serious to be concerned about. While this varies for everyone, migraines are not something that should be brushed off. As mentioned above, a migraine can derail a person’s daily activities such as work, school, and social gatherings. There are several different types of migraines, and while people may experience migraines as merely an isolated condition, some kinds of migraines, though rare, can serve as a pre-marker for something more serious, such as a stroke.

There is a common myth that caffeine is a major cause of migraines, but that is not necessarily the case for everyone. Caffeine has actually been proven to help alleviate both headaches and migraines for some. It should be noted, however, that high caffeine intake may be a migraine trigger for some people. The key takeaway here is that different foods and beverages can trigger migraine symptoms in different individuals. To best understand what your triggers may be, it is recommended to keep track of food and drink intake as well as symptoms in a diary to identify potential trends.

If you live with migraines, be sure to consult your physician for guidance and proper treatment options. Consider enrolling in a clinical research study with BTC of New Bedford. You may qualify for no-cost care and contribute to the advancement of medical research!