Posted at 21:27h in Mental Health by KLong 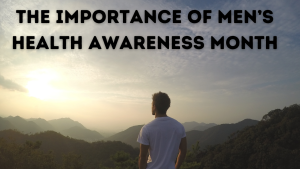 Did you know that November is Men’s Health Awareness Month? This month, males of all ages are encouraged to take special inventory of their overall health – both physical and mental. Historically, conversations surrounding mental health were minimized or ignored, and unfortunately, men’s mental health is still a bit of a taboo topic today for a variety of reasons. If you are a male, or if there is a male in your life that you care about, read on to learn some harrowing statistics about men’s mental health.

According to the CDC, the suicide rate for men is nearly four times higher than it is for women. Among all reported suicides, white men account for nearly 70% of them, and the demographic that is at the highest risk for suicide is men over 65 years of age. On a global scale, suicide represents half of all violent deaths for men worldwide. Women are twice as likely to become diagnosed with depression, but that is not to say that women are necessarily more susceptible to this mental illness. In fact, some therapists believe that men are just as likely to have depression, but they are significantly less likely to seek professional help.

The Reason for this Crisis

It is clear that these statistics suggest that men’s mental health is a crisis situation, begging the question as to why men are not adequately being treated for mental health issues. Societal expectations are a major factor: toxic masculinity as continued by society discourages men from speaking up when faced with mental or emotional struggles, prompting them to remain stoic and unemotional on the surface. Traditional gender norms perpetuate the idea that men should be tough and strong for their female counterparts.

What You Can Do to Help

Overcoming the societal expectations for men and dismantling harmful gender norms is an ongoing challenge that cannot be solved overnight. However, there are things you can do in your day-to-day life that can help with the men’s mental health crisis. Watch out for the signs of depression in the men in your life and do not ignore them. Symptoms may include irritability, social isolation, loss of interest in activities once previously enjoyed, engaging in risky behavior, and using drugs and alcohol. Offer support to those closest to you; letting someone know that you are there to listen and support someone in their time of need can make all the difference.

Join a Clinical Trial with BTC of New Bedford

If you or someone you know is battling depression, understand that you are not alone. Consult your doctor for assistance. BTC of New Bedford is currently enrolling individuals with depression for a clinical trial. Learn more today to see if you qualify!